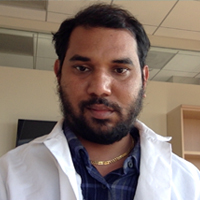 Sathish Babu Vasamsetti is a research scientist in the fields of macrophage and vascular biology. He was awarded with the prestigious “Council of Scientific and Industrial Research” fellowship in 2009 and joined at Indian Institute of Chemical Technology, Hyderabad (India) for PhD to study the mechanisms that are involved during monocyte to macrophage differentiation in the context of vascular complications like atherosclerosis and aneurysms. In 2015, he was awarded with PhD in Biochemistry and joined Dr. Partha Dutta’s lab in 2016 to investigate the role of immune cells particularly macrophages in disease pathogenesis such as heart failure, atherosclerosis, diabetes and insulin resistance in the Vascular Medicine Institute at the University of Pittsburgh. His doctoral and post-doctoral research work had resulted in peer-reviewed publications like Diabetes, Free Radical Biology and Medicine, Immunity and Science Translational Medicine as a lead author. He is a member of professional organizations like American Heart Association (AHA), American Diabetes Association (ADA), American Society of Investigative Pathology (ASIP) and Society for Cardiovascular Pathology (SCVP).